The conference was opened with a comprehensive introduction by Andrew West, University of Alabama, who outlined the overall similarities and specificities of multiple prion-like neurodegenerations like Alzheimer’s, Parkinson’s, ALS and Huntington’s.
Later Laurent Pradier from Sanofi outlined the difficulties of clinical trials in these indications, emphasizing the need for biomarkers for more accurate diagnosis and monitoring of disease progression. Potential new strategies for intervention in AD using G-protein coupled receptors or the microbiome were highlighted by Sylvie Claeysen from Inserm, Montpellier, France, while Luc Buée from Inserm, Lille, France, focused on the tau protein and its role in different tauopathies.
Jan v.d. Schuuren of Galapagos and Gerard Griffioen of Remynd showed their advances in developing new AD medications based on mechanisms outside of ‘well-travelled paths’, targeting a G-protein involved in neuronal rescue and neuroinflammation, respectively.
Sabine Lange from Cellular Dynamics showed human cellular models of AD and the company’s increasing base of iPS cell derived human neuronal cultures.
Joseph Araujo explained Intervivo’s aged Beagle model of AD, showing its many translational properties and Bart Roucourt explained Remynd’s rodent models for the investigation of drug candidates acting by different mechanisms.
Marcus Fändrich from the University of Ulm went into the structural background of prion-like misfolding of abundant proteins, important in neurodegenerative diseases and Hans-Ulrich Demuth outlined the importance of posttranslational protein modification in the generation of disease-inducing misfolded protein aggregates.
Finally Michael Harte from the University of Manchester gave a comprehensive overview of the importance of neuroinflammation in neurodegeneration and exemplified that misfolded protein aggregate induced-disease models do exhibit neuroinflammation in addition to synaptic and neuronal degeneration.

The highly interactive first day with lively Q&A sessions, intense discussions at the posters and also during breaks, was characterized by a very collaborative spirit. All delegates relaxed during the tasting of three Rheinhessen white wines and three red wines. In the grape-variety-quiz many showed their evolved palate, entering into the prize draw with two out of three grape varieties determined correctly. The prizes were drawn during the outstanding three course surprise dinner, which started with three different very tasty ‘amuse gueule’. Chef Philip Stein’s team clearly justified their ‘Guide Michelin Star’ with their excellent performance!

The second day was focused on Parkinson’s and other neurodegenerations and was opened by Nico Diedrichs from the Luxembourg Hospital giving his take on the different aspects of Parkinson’s disease independent of the dopamine system and highlighting compensation mechanisms as a possible target for pharmaceutical intervention. Manuel Buttini from the Center of Systems Biomedicine, Luxembourg, explained the advantages and limitations of various PD mouse models.
Andreas Köpke explained the advantages of aggregate-induced AD and PD in vitro and mouse models showing aspects of synaptic and neuronal degradation, neuroinflammation and cognitive decline. Jonathan Brotchie from Atuka showed examples for truly translational symptomatic drug development in non-human primates and a developing new model based on virus derived expression of disease-inducing α-synuclein forms.
Massimiliano Bianchi of Transpharmation explained the potential utility of microtubular related biomarkers in α-synuclein disease.
Pekka Kallunki of Lundbeck explained the application of different in vivo models to optimize therapeutic antibodies that neutralize α-synuclein aggregates, while Takashi Kitajima explained the optimization of the PK profile for L-dopa in the Ono Pharmaceutical’s prodrug Ono2160 / CD, preventing side effects in long term PD therapy.
Andreas Weihofen outlined Biogen’s approaches to reduce α-synuclein aggregates in PD patients by their BIIBO54 antibody, as well as antisense approaches to reduce overall α-synuclein expression. Kenneth Christensen, now at Servier, explained the development of LRRK2 inhibitors while he was still at Lundbeck.
Fabio Montrasio explained Neurimmune’s use of clonal natural human antibodies for the detection and potential fight against protein aggregates in ALS.
Knut Biber, who recently joined Abbvie, explained his insights into the importance and mechanisms of neuroinflammation and especially microglia in PD and Erich Wanker of the Max-Delbrück-Center, Germany, exemplified the insights of his group in the formation of misfolded protein aggregates in AD and HD and their discovery of small molecules effectively interfering with this misfolding process.

At the end of the second day a very interactive panel discussion took place highlighting the challenges of translation from animal models to clinical investigations, addressing the frustrations of biotech companies in understanding the rationales of pharmaceutical companies and in interactions with them, and also the difficulties of academic groups when interacting with the industry. One conclusion was that collaborations should be focused on the collaborative science, creating win-win relationships, taking all parties and their valuable contribution into account. 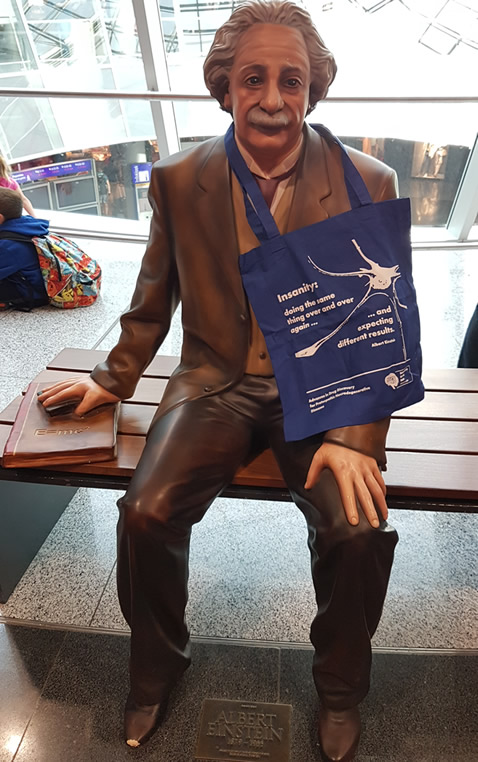 The highest score was 5, the lowest 1. We had 22 returned sheets of 41 delegates on site. Some additional delegates commented very favorably in personal Emails, thank you!